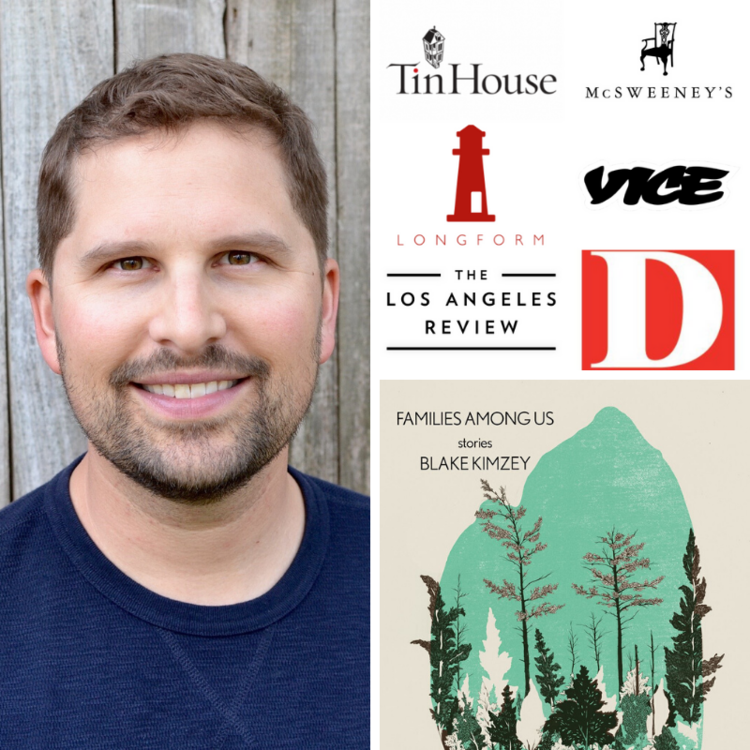 Blake Kimzey founded and directs Writing Workshops Dallas. Named one of D Magazine'sArtists to Learn From, he is a graduate of the MFA Program at UC Irvine; Blake also sits on the Board of the Elizabeth George Foundation and received a generous Emerging Writer Grant from the Foundation in 2013. His fiction has been broadcast on NPR, performed on stage in Los Angeles, and published by Tin House, McSweeney’s, Vice/Terraform, Redivider, D Magazine, Green Mountains Review, Short Fiction, FiveChapters, The Lifted Brow, Hobart, Puerto del Sol, The Los Angeles Review, The Masters Review, Booth, Faultline, FLAUNT Magazine, Malibu Magazine, Day One, PANK, Fiction Southeast, Surreal South '13, and selected by Pulitzer Prize-winner Robert Olen Butler for inclusion in The Best Small Fictions 2015. Blake’s collection of short tales, Families Among Us, an Indie Bestseller, was published by Black Lawrence Press in 2014. He recently completed his first novel and is working on his second. Blake has been awarded fellowships to attend the Squaw Valley Community of Writers and the Vermont Studio Center. He is proudly represented by Ryan Harbage at The Fischer-Harbage Agency. He teaches in the Creative Writing Program at SMU and has also taught creative writing at UT-Dallas and UC-Irvine. Follow him on Twitter @BlakeKimzey, find him online at blakekimzey.com, contact him at blake@writingworkshopsdallas.com, or use the Contact link above. 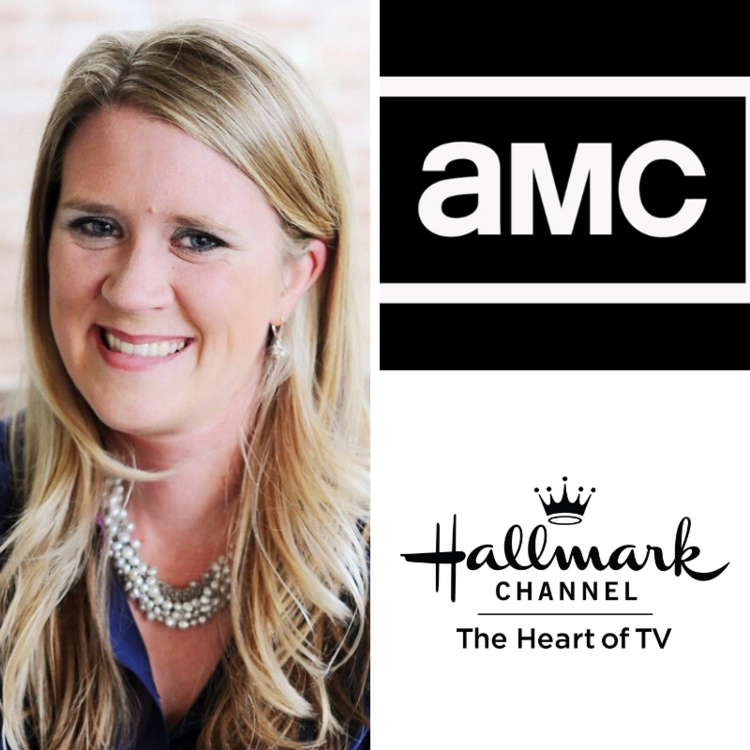 Whitney Davis is the founder of Whitney Davis Literary, a boutique literary consultancy offering management for screenwriters and editorial/career consulting services for writers. After receiving her BA in Literature and Creative Writing, Whitney moved to Los Angeles where she started out as a TV writer, getting signed to the William Morris Agency (now WME) at the age of 26. During the writers strike, Whitney began her career as a freelance script consultant and developmental story editor for aspiring screenwriters and novelists. Over the past 10 years, Whitney has worked with award winning novelists and optioned/produced screenwriters. In 2015, after being nudged by many of her existing clients, Whitney started her own literary management firm for screenwriters and continues her work with novelists and screenwriters as a developmental story editor and publishing consultant. In the screenwriting world, she moves best in the TV space, and her clients have pitched their scripts to several studios that include HBO, FX, Netflix and Hallmark to name a few.  On the novel writing side, her clients have landed literary agents and secured book deals with Harper Collins, Scholastic and more. Whitney is a sought after panelist and conference speaker, participating at events all over the country. In the last year, she has spoken at The Great American Pitchfest, the Greater Los Angeles Writers Conference, The Writer’s Digest Novel Writing Conference, The Genre LA Conference, and has paneled at events such as AWP’s 50th Anniversary Conference in Washington D.C, the Downtown Los Angeles Film Festival and was selected as a guest of honor for an International Screenwriting Association event this past summer. You can find her at several more events in 2017. Whitney has a passion for storytelling and loves encouraging writers to fulfill their dreams.  You can find her across all social media platforms at @wdavisliterary. To contact Whitney, use the Contact link above. 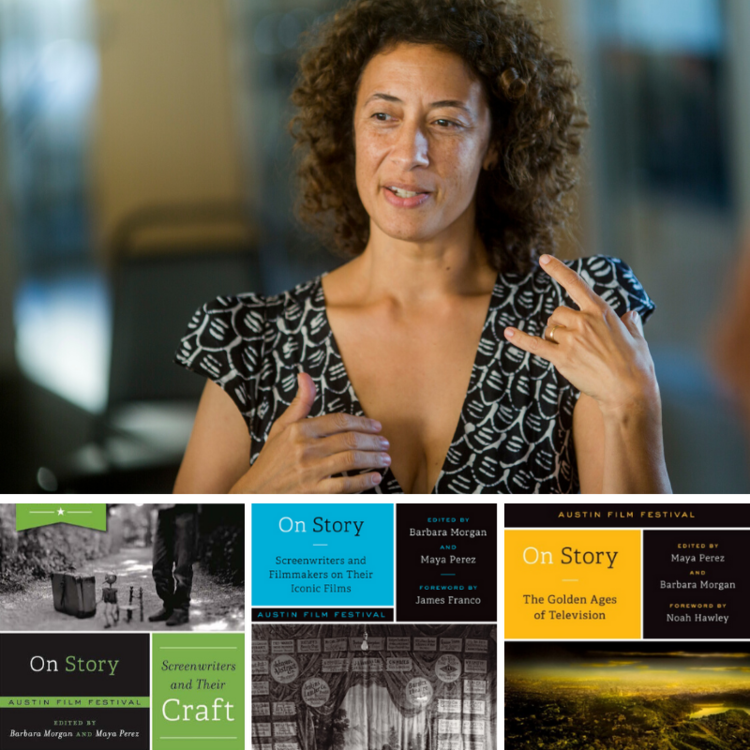 Maya Perez is a writer and producer. Her writing has appeared in Joyland, Electric Literature,The Masters Review, Misadventures Magazine, and she is co-editor of three collections of interviews with screenwriters and filmmakers: On Story – The Golden Ages of Television, On Story - Screenwriters and Filmmakers on Their Iconic Films, and On Story - Screenwriters and Their Craft, all published by the University of Texas Press. She is an executive producer on the television series On Story, now in its ninth season on PBS. On Story won a Lone Star EMMY Award® for Best Interview/Discussion Program Series in 2018 and for Best Arts/Entertainment Program in 2014. It was nominated for a Lone Star EMMY Award® in 2016. She has been the recipient of fellowships from the Michener Center for Writers, SFFILM/Westridge, the Sundance Institute, New York Stage & Film, and was named one of MovieMaker Magazine and Austin Film Festival’s “25 Screenwriters to Watch” for 2016. She received a BA from Vassar College and an MFA as a fellow at the Michener Center for Writers at The University of Texas at Austin. Maya currently teaches at the Michener Center for Writers and The University of Texas at Austin. An active member of the arts and education community, she serves on boards and committees for several organizations, including Austin Film Festival, Fantastic Fest, Texas Book Festival, and Vassar College. She grew up in Kenya, Zambia, and the United States and now lives in Austin, Texas, with her husband, artist Johnny Walker, and their daughter. Photo Credit Johnny Walker. 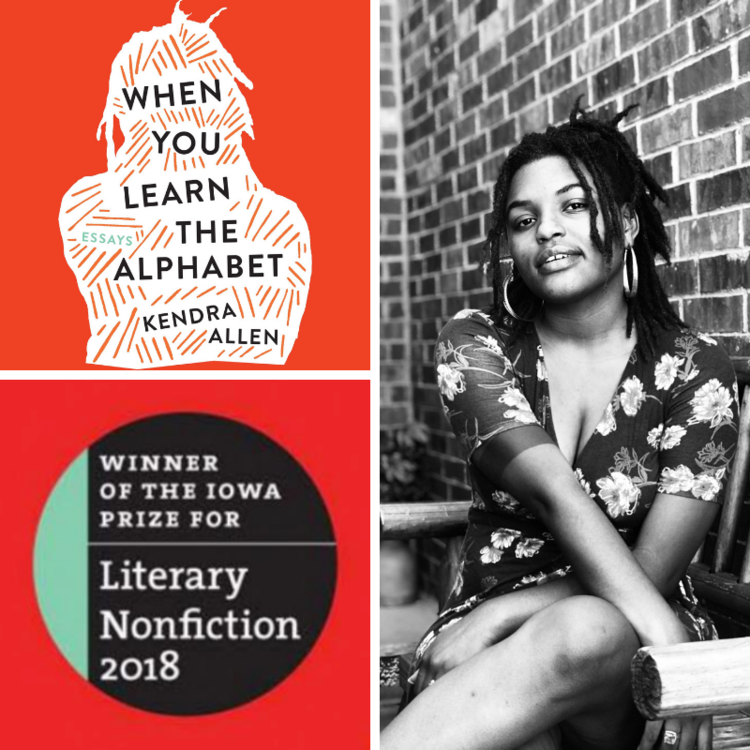 Kendra Allenis the author of the award-winning essay collection When You Learn The Alphabet (University of Iowa Press), winner of the 2018 Iowa Prize for Literary Nonfiction. Born and raised in Dallas, Texas, Kendra has an MFA from the University of Alabama. Her work has also appeared in brevity, december, and The Rumpus, among others. Kendra tweets @KendraCanYou. 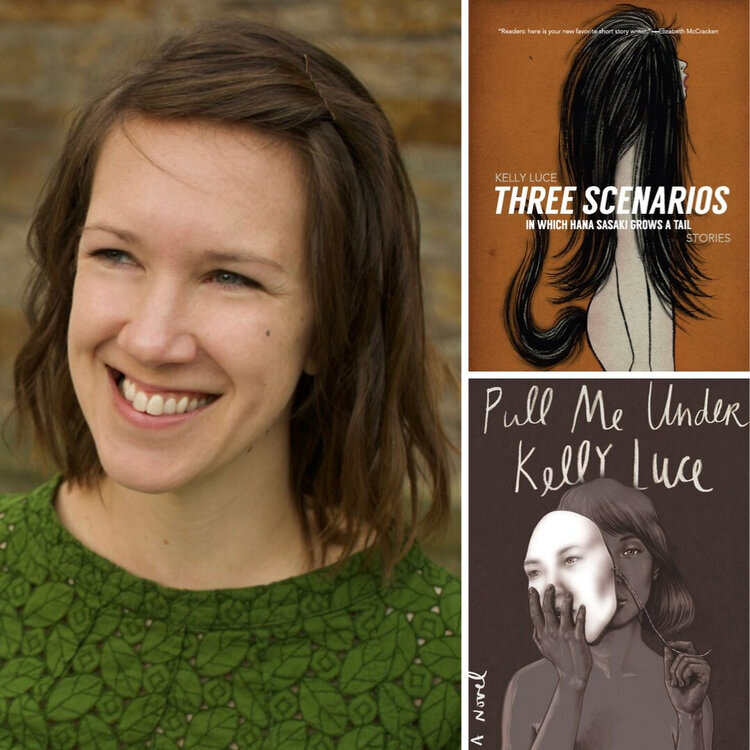 Kelly Luce is the author of Three Scenarios in Which Hana Sasaki Grows a Tail (A Strange Object, 2013), which won Foreword Review’s Editor’s Choice Prize for Fiction, and the novel Pull Me Under (Farrar, Straus and Giroux, 2016), a Book of the Month selection and one of Elle's Best Books of 2016. After graduating from Northwestern University with a degree in cognitive science, she moved to Japan, where she lived and worked for three years. Her work has been recognized by fellowships from the MacDowell Colony, Ucross Foundation, Sozopol Fiction Seminars, Ragdale Foundation, the Kerouac Project, and Jentel Arts. In 2015 she received an MFA in fiction and screenwriting from the Michener Center for Writers at UT Austin, where she was editor-in-chief of Bat City Review and the editorial assistant for the O. Henry Prize Stories anthology. Her short fiction and essays have appeared in New York Magazine, The Chicago Tribune, Salon, O, the Oprah Magazine, The Sun, The Southern Review, New England Review, American Short Fiction, Gettysburg Review, and other publications. She is the Essays Editor for Electric Literature and was a 2016-17 fellow at Harvard’s Radcliffe Institute for Advanced Study. She lives in an old grist mill in Knoxville, Tennessee. Finally, here is a short piece Kelly wrote about reading for the O. Henry Prize Stories. More at kellyluce.com. 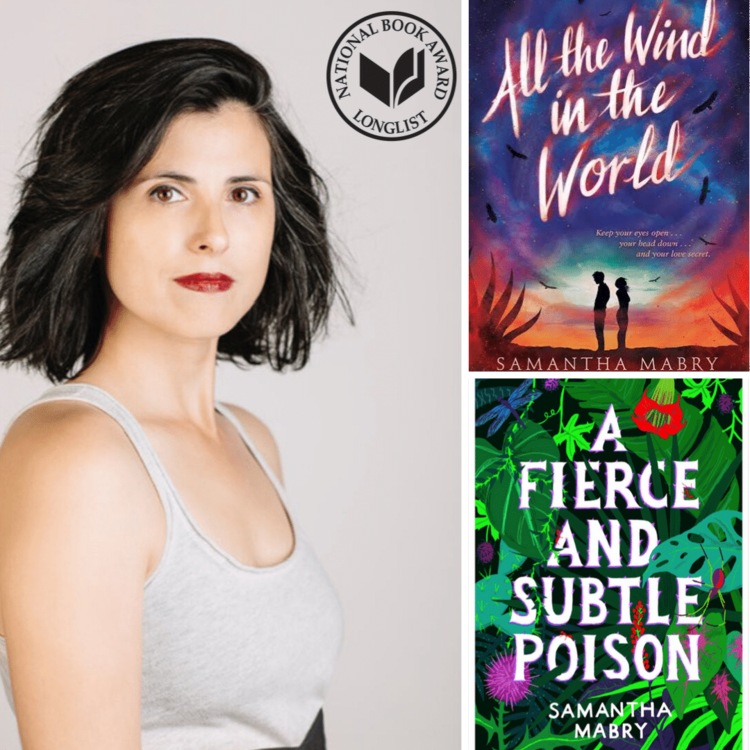 Samantha Mabry is the author of the young adult novels A Fierce and Subtle Poison and All the Wind in the World, the latter of which was long-listed for the National Book Award and named by Amazon as a Best Book of 2017. Her forthcoming novel, Tigers, Not Daughters, will release in the spring of 2020 from Algonquin Young Readers. Her short work has been featured in D Magazine, [foreshadow], and h_ngm_n. Born and raised in Dallas, Samantha graduated magna cum laude from Southern Methodist University with a degree in English.After taking a gap year, she moved across the country to complete a Masters in English from Boston College. Then, she moved right back to Texas. Currently, Samantha teaches composition, Latinx Literature, and creative writing at El Centro College in downtown Dallas. 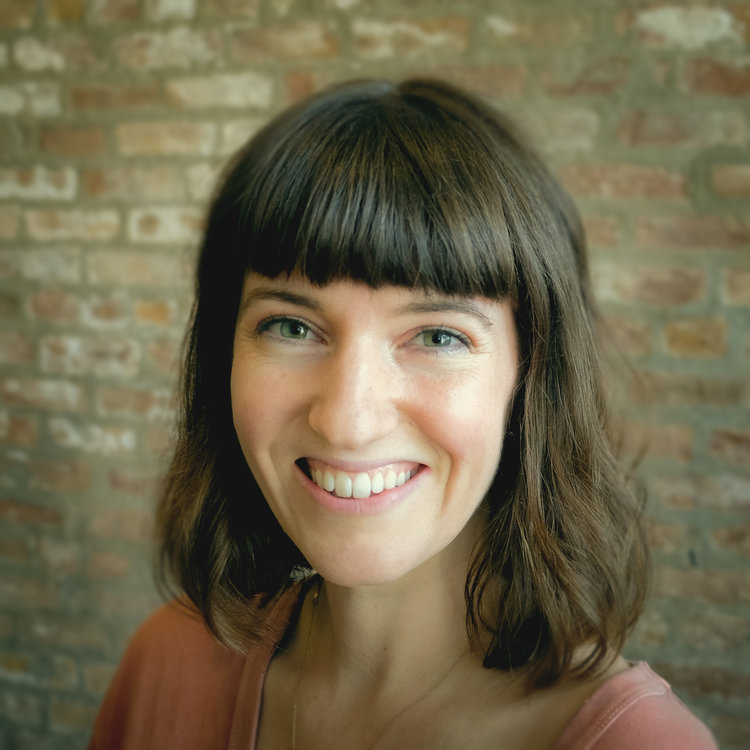 Tori Telfer is a writer and editor based in Chicago. Her first book, Lady Killers: Deadly Women Throughout History (Harper Perennial), was published fall 2017, and called “exceptionally well-sourced and engaging, if gory” by NPR. Her nonfiction writing has appeared in Smithsonian, Salon, Vice, Jezebel, The Hairpin, The Awl, GOOD magazine, Chicago Magazine, The Establishment, and elsewhere, and has been featured several times on longform.org. She has a serial killer anecdote for every social situation, and is always overjoyed to talk about “going freelance” (not to be confused with “going clear”). Read more at toritelfer.com. 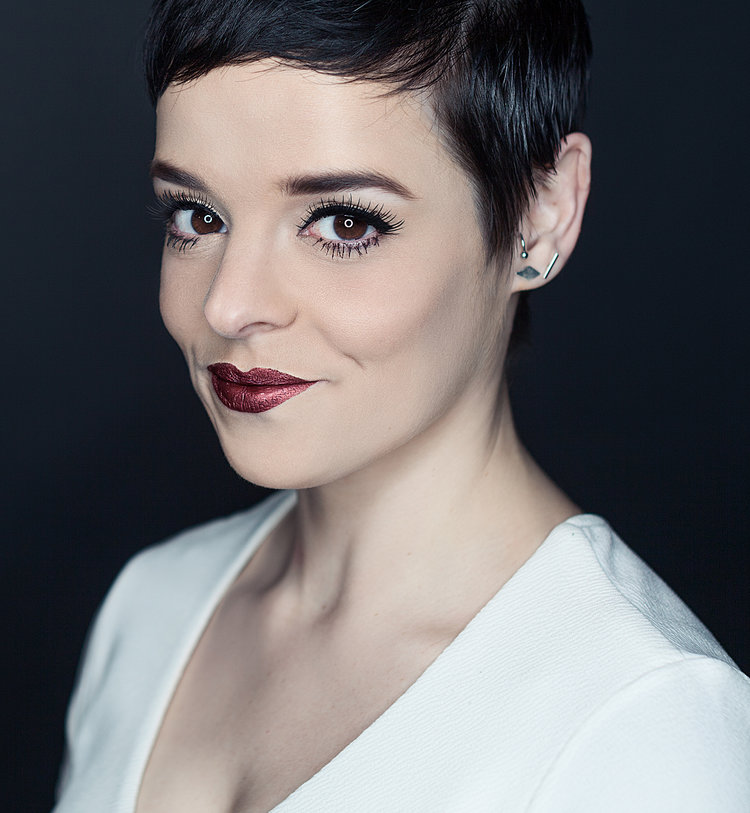